Your Guide to Planning, Planting, and Growing Perovskia

Perovskia atriplicifolia is a late summer perennial, better known by its common name Russian sage. It has aromatic, silvery-green foliage and produces a haze of tall, lavender-blue flowers from August through September. The plants are sun-loving and drought tolerant, and are not bothered by deer, rabbits, insects or disease.

What to Know About Russian Sage

Russian sage is a shrubby plant with a woody base. It grows in a multi-stemmed clump and has a loose, but upright habit. By the end of the summer, the plants are typically 3 to 4 feet tall. Flowers begin opening in late July and continue for up to two months, with tiny blossoms covering the entire plant from top to bottom. From a distance the plants look like a purple-blue haze

Perovskia flowers on “new wood,” which means last year’s stems should be pruned away each spring. Cut back the old stems to a height of 6". If you garden in a cold climate, you may find that the stems are killed back to the ground. Don't worry. New stems will usually sprout in late spring.

There are several species of perovskia, but only Perovskia atriplicifolia is commonly available. In 1995 it was named Plant of the Year by the Perennial Plant Association. Since then, a number of new cultivars have been introduced, including ‘Blue Spire,’ ‘Blue Haze,’ ‘Filigran,’ ‘Longin’ and ‘Little Spire.’ 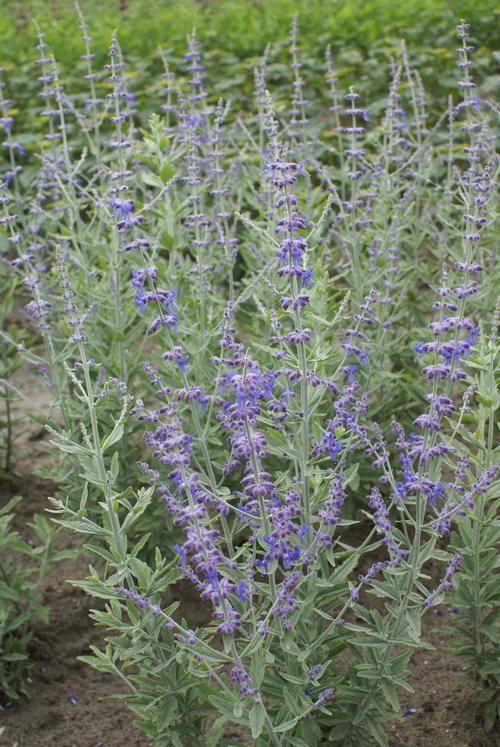 Sun and Shade: Russian sage performs best in full sun. In partial shade, the plants tend to stretch and flop over.

Hardiness: Perovskia is winter hardy in zones 4 to 9. Where winters are cold and wet, grow the plants on a slope or in soil that drains quickly and never gets water-logged.

Where to Plant Perovskia : Russian sage is an excellent plant for perennial borders where it will provide dependable late season color. It is also popular for landscaping and looks particularly good in informal or prairie-style plantings that include ornamental grasses and other low maintenance perennials. 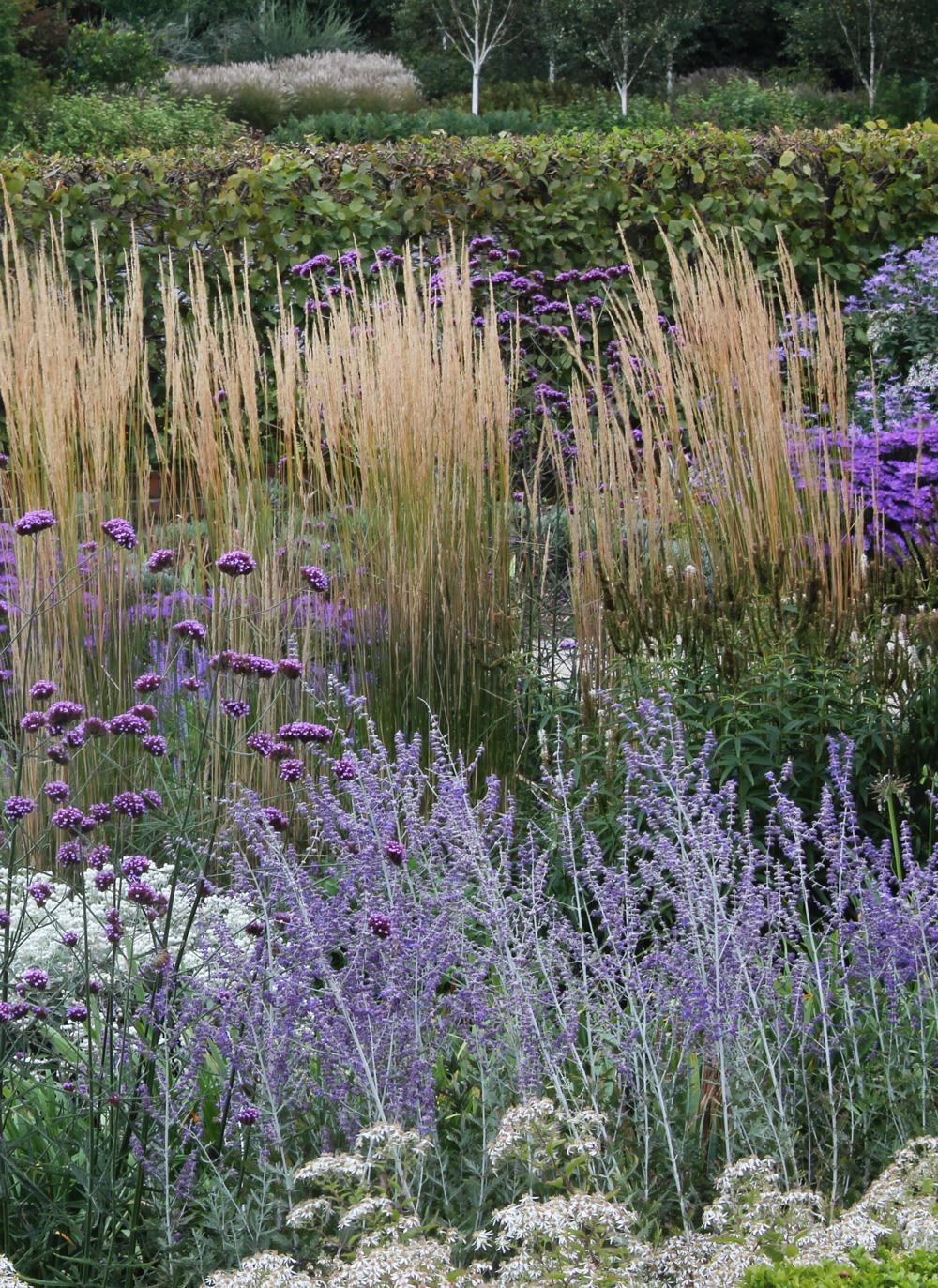 How to Plant Russian Sage

Choose the planting location carefully. Perovskia will not survive in soggy, poorly drained soil. The plants also need good air circulation, so avoid adding them to a crowded flower bed or a corner where the air is stagnant.

Space young plants 12 to 18” apart. Because perovskia is woody, it takes a few months for the plants to settle in. During this time, they must be watered regularly so the root ball does not dry out. Plants will not reach their ultimate size until the second or even third year. At that point they will have a strong root system and be drought tolerant. Established plants are tough and long-lived. 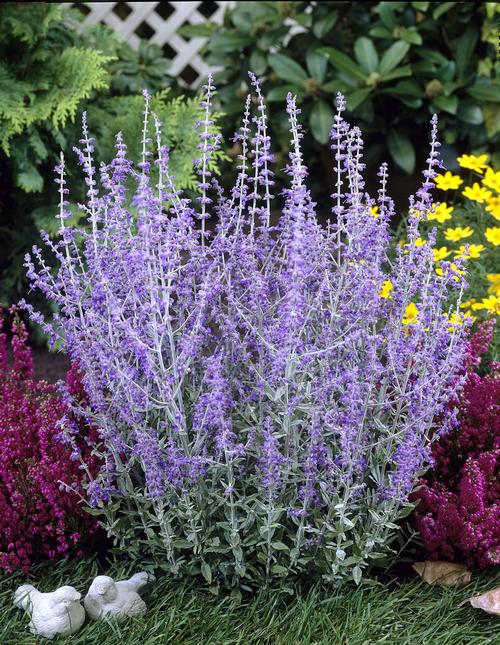 How to Care for Russian Sage

When Russian sage plants are healthy and happy, they may begin to spread by runners. To control growth, divide the plants every few years and remove the runners.

It can be difficult to transplant perovskia because it is woody and usually has a long taproot. New divisions and runners can be pampered in pots or a nursery bed until they form new roots. Perovskia may also be propagated in spring from stem cuttings. Use tender shoots taken from near the base of the plant. 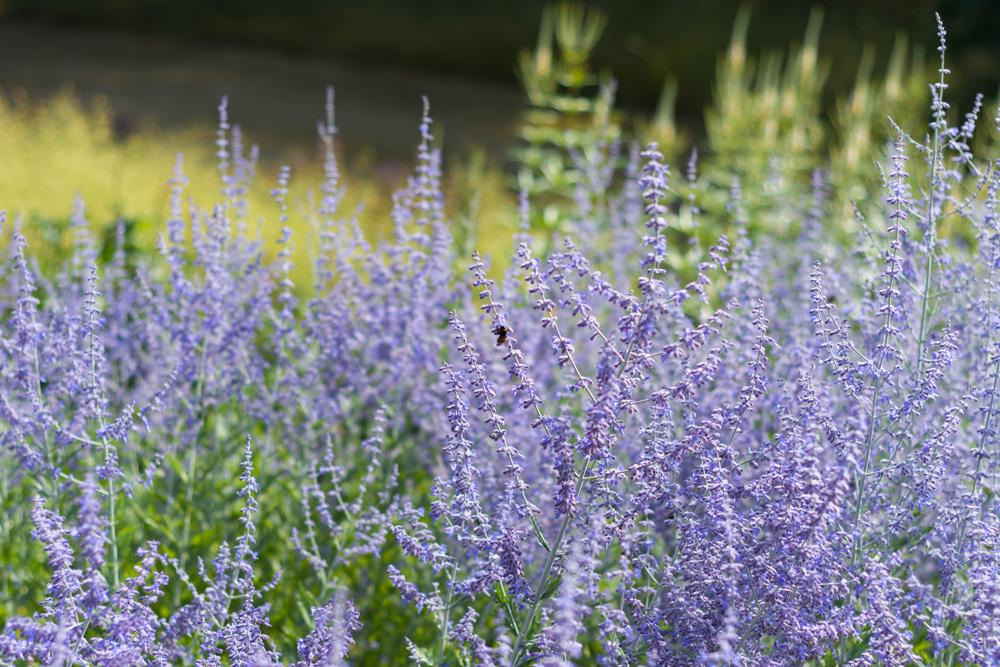